We've been hard at work to implement plugins for the IntelliJ IDEs that support saker.build. The first release is finally out! See the installation instructions to get started!

The plugin serves as the core for the saker.build support in IntelliJ IDEs. It allows configuring your project to properly run your builds, and helps you write the build scripts with completion proposals, syntax highlight, and structural outline.

The current implementation of the plugin mostly reached feature parity with the Eclipse plugin, some aspects of it is still being ironed out. (E.g. configuring other languages support based on the build configuration is still missing)

We've also improved the build script editor support in this version, which applies to the newly released Eclipse plugin as well. The code completion proposals should provide better results, and be more error-tolerant if the script contains syntax errors.

While the dark theme for Eclipse is rarely used, it is more dominant in the JetBrains land. We've tweaked the build script syntax highlight colors for the dark style in order to be more readable. 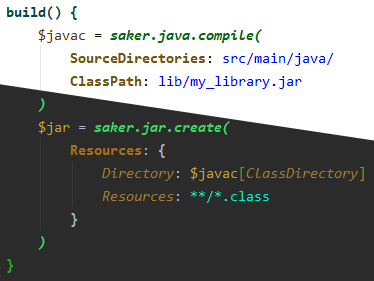 In the following times we'll be looking at releasing the Android support package for saker.build, while creating additional plugins for the IntelliJ ecosystem in order to properly configure the IDE based on the build configuration.